I practice two very different kinds of divination. One involves asking a question with a deck of cards or set of ogham staves at hand and interpreting the answers that are given. The other is deeper, more silent and more solitary: it involves taking a question out into the world and listening for the answer.

On 24 June 2016 I woke at sunrise feeling sick with fear and went out into the garden. Everybody else was indoors, in bed, though probably not sleeping. The results of the EU referendum had just been counted. I let all my fear fall away, planted my bare feet in the soil, drew down the morning sky into my lungs and simply asked is this really going to happen?

The answer was equally simple, powerful and unequivocal

It took a while for this Welsh internationalist to come to terms with it.

END_OF_DOCUMENT_TOKEN_TO_BE_REPLACED

Gradually, over the past 10 years, I have come to think of August as the start of Harvest season – following the Flowering season of late spring to midsummer. When I sat down to write today (an essay about ontologies in information science, as it happens; not a blog post) this title came to mind: a line from the Bible, but more especially from Oranges are not the Only Fruit. You know I’m not a Christian, but I’ve always loved the aesthetic: the bathos of apocalyptic visions realised in fading needlepoint, the frankincense and brimstone odour of the language. There’s something strangely comforting about it.

The flowering season has ended and this is the season of gathering in. The heatwave is over and the rain has started falling once again. My mental health has tumbled down an unexpected hole. I am indeed not saved. Any latent psychic powers I may have are limited to my (unconscious) ability to sense a coming stressful period at work and get ill just before it starts.

It started with a missing Sunday. I wrote nothing in my journal, posted nothing to social media, just did… nothing at all, that I can remember. A missing day in the patchwork of my memory.

The next day, at sunset, I ran out of a marquee behind the Bronte Parsonage in Haworth and over to the furthest corner or the field, where I climbed into a gnarled old elder and hid for the interval of Emily Brontë’s 200th birthday concert. I felt like an overfull glass of water, liable to spill at any moment, and I didn’t want to spill on other people. After the interval, revived by the break, I managed to come back inside to watch The Unthanks play a beautiful, intimate set inspired by the poetry of Emily Brontë, the songs of Molly Drake, and the testimony of Patience Kershaw. I left without talking to them, in spite of K’s encouragement and in spite of Becky smiling over at me, in friendliness or recognition. I would have told them that the singing weekend they ran in Seahouses was one of the best of my life. But, for now, it’s enough just to know it.

Last Wednesday, on the train home from York, I stopped in Bradford and spent a while wandering around. Wandering helps, especially in unfamiliar places, and I would like to get to know the city better. I have a soft spot for Bradford. Its wool-and-coal history reminds me a little bit of Wales, and makes it a little less green-wellies-and-shotguns than other parts of Yorkshire can be.

As I walked down Ivegate, a man in a natty purple bow-tie held up a sign saying “it’s a bar!” and called out to say hello: “we’re a safe space for women on their own, LGBTQ+ individuals, anyone who needs to find a friendly place,” he explained.

I came inside, sat at the bar, got out my crochet project and started stitching with a glass of Dandelion and Burdock on the side, while he told me stories of growing up in Bradford. At one point he called me ‘Myfanwy’ – then paused and asked himself “why did I call you that?” “Maybe you were thinking of the song,” I said, and sang the first few lines. He listened intently, then found a recording online (Treorchy Male Choir, at my insistence) and played it over the stereo in the bar. “I think I used to sing this in the choir as a boy,” he told me. He had lost most of his memories in an accident. Most of the memories he had shared with me were reconstructed, stories his family told him after the amnesia.

K came down to join me after work and ended up in the ‘Electronic Music Booth’ swapping survey answers for a free pint of Barnsley Bitter.

On the way home, we saw a hare in the fields outside Oxenhope. My dull brain stared, uncomprehending, while whatever part of me is not that brain (please, we need more philosophy of mind around depression: which ‘me’ is always ‘me’ regardless of this illness? And who is the ‘me’ that gets ill, if this other ‘me’ is watching?) danced around until the words came: smaller than a deer, bigger than a rabbit. A hare!

And then up into the moors, a journey I will never get tired of, where we saw grouse gliding down the hillsides on their short, sharp wings, and an early evening owl fly by. 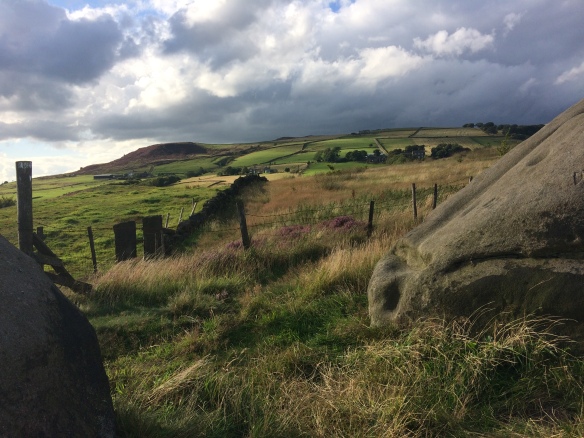 on the edges of the moorland

This is stony ground, it’s hard to put down roots here, but it’s so beautiful I want to keep on trying.

That is what I really meant to say.

Life is so beautiful, I want to keep on trying.

And I want to keep on writing, even if I don’t have anything to say. These moments feel like foraged treasures – the shards of pottery and stones and shells I gathered as a child and kept in pockets or on windowsills. They matter to me. Perhaps, if I can gather them together, they will help me understand, or at least keep going.

And on that note I should get back to my essay…

Appraisal will attend as carefully to the marginalized and even silenced voices as to the powerful and official texts, and search for evidence of governance rather than government.

[warning: this post is long and contains more detail about archives than you probably ever wanted to know – but I needed to write it]

70 years ago, on the summer solstice, HMT Empire Windrush docked at Tilbury in Essex and 500 British citizens from the Caribbean disembarked to start a new life on this island.

I’ve thought about the Windrush generation a lot over the past few months, from the perspective of an archivist-in-training. It raises so many questions about what we do when we keep records. This post was started months ago as I mulled them over and I’m still swithering over whether I should post it. Who am I to say these things? Just a student with a fire in her belly.

END_OF_DOCUMENT_TOKEN_TO_BE_REPLACED

It’s Aries season and I’m feeling angry. And nothing fuels my writing quite like anger…

END_OF_DOCUMENT_TOKEN_TO_BE_REPLACED

[May contain Star Wars spoilers. Should contain references to Ishiguro’s novel An Artist of the Floating World, but doesn’t.]

END_OF_DOCUMENT_TOKEN_TO_BE_REPLACED

It’s the most wonderful time of the Welsh musical year, when Rhys Mwyn compiles the annual Siart Amgen – essentially, a Welsh Festive Fifty. The nominations are already causing a controversy on Welsh twitter…

a song so alternative that nobody has heard it

Tempting as it is to take a chunk of time out of my studies to wax lyrical about what we even mean by ‘alternative’ – especially in the context of a minority language –  I’m going to leave you with my top 10:

END_OF_DOCUMENT_TOKEN_TO_BE_REPLACED

Content warning: if you’re suffering from poor mental health, sometimes reading the experiences of others can send you into a tailspin. Please take care when reading this. It’s mostly reflective, but still pretty raw.